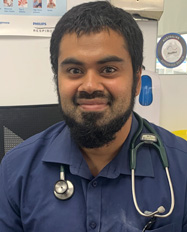 Dr. Imran Haque graduated from the University of Sydney after enrolling in the prestigious combined bachelor of advanced science and MBBS. There he was awarded the Outstanding Achievement Scholarship (with a University Admission Index of 99.95) and maintained a better than high distinction average grade. He was placed on the Dean’s Honour Roll for all years in his advanced Science degree and had an avid interest in Mathematics with first place in Advanced Partial Differential Equations. Thereafter he dabbled in Immunology and Neuroscience before majoring in Physiology. He was also the recipient of the Dominique Clancey prize from Sydney University Western Medical School and continued basic physician training at Westmead Hospital where he was awarded “Registrar of the year”. He placed first in the written FRACP part 1 exam at Westmead Hospital as a BPT.

He was also involved with implementation of the first PE response team in Australia as part of the Westmead Hospital Respiratory department. He is now in his final year of dual Respiratory and Sleep training and continues to keep up with his passion of teaching.